Skip to content
Alone in Tokyo By Philip Bloom 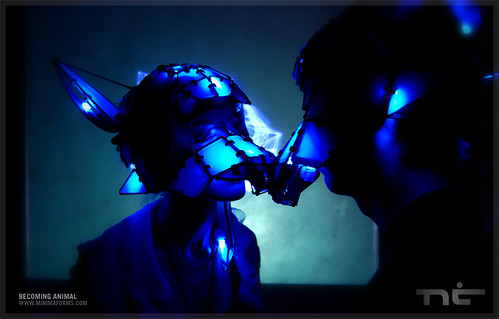 An interactive performance piece developed by Minimaforms for this years Faster than Sound Festival in Bentwaters’ K9 building in Suffolk, England. The project develops the story of the mythical three headed beast Kerberos, guardian of the underworld. The project will be installed at the K9 building in Bentwaters Airbase in Suffolk, England. Bizarre. I have no idea what’s going on? Do you…

“It’s an edgy neighborhood and he’s an edgy guy and the house is a little edgy.”

Despite all that edge, not everybody is thrilled with what they see.”It’s exciting to have such a high-profile artist in the neighborhood,” said Chris Gullian, a sculptor who lives just a few blocks away.

“But I think that building is a blemish on an otherwise beautiful community of old buildings.”

Sleepwalkers, transforming 53rd and 54th Streets into a vast outdoor multiplex. Five short interconnected films will tell the story of one night in the lives of five New Yorkers, played by Donald Sutherland, Tilda Swinton, Cat Power, Seu Jorge, and an unknown, Ryan Donowho, a teenage busker whom the artist, Doug Aitken, met in the subway. Aitken calls the spectacle a “silent film for the 21st century,” and projected every evening from 5 to 10 p.m. for 28 consecutive days, the show is likely to be the most-seen in MoMA’s history.

The 38-year-old Aitken is already something of an art-world prodigy. He won the International Prize at the Venice Biennale when he was 31. He’s had countless solo shows and has exhibited at the Whitney and the Centre Pompidou. He’s even made music videos for Interpol and Fatboy Slim. But Sleepwalkers will elevate Aitken from downtown art stardom to MoMA’s uptown firmament.

“Doug is really pushing the envelope,” says Klaus Biesenbach, the chief curator of media at MoMA and the co-curator of the project. “He’s like a scientist who is really obsessed with an experiment and how it furthers the discussion of his body of work.” For MoMA, the project is a chance to shake off its stodgy post- expansion image and to prove those massive new walls have a purpose.

The Apple iMac. The New Beetle. The Oh Chair. The Guggenheim Bilbao Museum. These are all classic examples of blobism, a futuristic retelling of the curve, resulting in protoplasmic forms designed by computers. A growing number of inventive architects are now embracing this concept, making blobitecture the hottest global trend in the industry.

This is the first book to focus exclusively on the blobitecture phenomenon in detail: how the process works, the geometric and environmental challenges it presents, the sophisticated software that allows artists to bend the lines of traditional architecture, and the stunning work produced by this art form. Featuring curved walls to blob-esque furniture to Greg Lynn’s Embryological House and Koloatan and McDonald’s Title House, this is both a showcase of the best in blobism and a guide to applying it in a designer’s own work.

A black background should be used in a limited manner though. It can be used as a way to create simple variety in a design, such as the headers on this page. A full page of white text against a black background certainly creates contrast, but seems to be harder to read than black text on white. In addition to black text against white, and white text against black, red text is also a suitable color that creates good contrast against white, and is acceptable to those with visual impairments.” Here’s a red background to ponder the opposite effect (red bg, black foreground image, white text)…