Global similarities in creative is hardily surprising, therefore don’t be surprised that tactics for one country often cross over rather nicely. File under similarities [Paris/New York ].

The image on the left is from a NYC bus shelter ad and the one on the right is from a Parisian bus shelter ad. Its interesting to note how global ad culture really is evolving as one. Despite the differences in products and possibly advertising companies, the tactics are relatively similar. Advertising spans all cultures as the dissemination industry no capitalist nation can do without and is thus more or less a global product.

One of the least remarked upon attributes of Jean-Luc Godard is how thoroughly he mastered the medium of video production. For him Video was not a mere substitute for film, but something separate and distinct, an aesthetic platform all its own to which he brought a heretofore unrevealed dimension in his art; one that subtly informed the work he would later do once he returned to Cinema.

It is, however, somewhat understandable that this pocket of his career should be so little known, given that his extended video works of the 1970s . . . Six fois deux, for example, or the remarkable France/Tour/Detour/Deux/Enfants . . . continue to languish in the limited access obscurity into which they landed with a thud virtually from the hour of their creation. There are those in the fundamentally class-based universe of cinephilia who would not have it any other way, however. I mean, don’t let’s kid ourselves here. There is, and always has been, a vast amount of social comfort to be derived for Us (the cinephile class) if You (the vulgar herd) have no access to the works we get to see in the cinephile dungeons of large urban centers (after all, if We can’t use film to construct a bizarro-world recreation of High School where we are no longer the geeks we once were then, I ask you, what is the point in all of this?).

So Jean-Luc Godard’s video creations remain militantly inaccessible by all but the small number who’ve been fortunate enough to see them. And more than any of these works, 1986’s Meetin’ WA stands as testament to the extraordinary facility he developed with this sub-medium; a faciility harder-achieved in the 70s, when video production was a far more dolorous and taxing enterprise than it is today.

At once sublime and witty, the 26 minutes of Meetin’ WA consist of an interview Jean-Luc Godard conducted in 1986 with Woody Allen, the director of What’s Up, Tigerlilly and Men of Crisis: The Harvey Wallinger Story (and soon to be featured in the final moments of Godard’s abortive Cannon Pictures’ King Lear). The chat itself is amiable enough; certainly avoiding any conceivable adversarial notes; but this, along with the New York setting (giving Allen the home field advantage as it were) does nothing to prevent a visible anxiety from growing on the part of the filmmaker as the interview goes on.

It’s as if it dawned on Allen, right in the middle of everything, that this tape could be . . . used . . . in some way he would not be able to control, that he was talking to a man who long ago demonstrated that he would not be bound to a standard not his own. Gradually, almost anticipating this development, Godard’s camera moves in closer and closer, Allen’s eyes dart back and forth between Godard and his translator (film scholar Annette Innsdorf) while questions are asked, the expression on his face bordering at times on open worry; like he’s waiting, with only marginal patience, for some sign of what it is he’s gotten himself into to manifest itself. It is, perhaps, the only occasion where Woody Allen seems as neurotic as the persona he wrote for himself was always said to be. Digging through my notes looking for the name of the Austrian born artist behind some amazing work featured here. Found it, Erwin Redl.

Austrian-born artist Erwin Redl uses LEDs as an artistic medium. Working in both two and three dimensions, his works redefine interior and exterior spaces. Born in 1963, Redl began his studies as a musician, receiving a BA in Composition and Diploma in Electronic Music at the Music Academy in Vienna, Austria. In 1995, he received an MFA in Computer Art at the School of Visual Arts in New York, where he now lives.

Redl’s works have received attention both nationally and internationally. With his piece Matrix VI (detail), he lit the face of New York’s Whitney Museum of American Art for its 2002 Biennial Exhibit. Works such as Matrix II, which was shown in New York, Germany, France, Austria, and Korea, and Fade I, which animated the Eglise Sainte-Marie Madeleine in Lille, France, explore volume and allow people to move through lit spaces. In the late fifties, Maharam sensed new opportunity and began supplying textiles for commercial interiors, helping pioneer the concept of contract textiles. Over the following three decades, the company flourished through a commitment to performance, value and service.

The fourth generation of the Maharam family has brought new definition and direction to the company, focusing on design and technology, and marrying past and present with textiles drawn from the archives of the twentieth century’s greatest creative talents, rich natural fiber textures, and next generation synthetics influenced by the latest runway trends.

Maharam has a relationship with A4studio based on a commitment to highly personal approach that breaks the computer generated aesthetic. Well respect designers have collaborated with Maharam over the years including Charles and Ray Eames, Paul Smith, Bruce Mau and Andree Putman. Maharam live in the same building as Ensequnce @ 251 Park Ave South, New York.

All New Yorkers develop tricks that allow them to stay ahead of the pack in daily life. These are generally tightly guarded secrets, but now that I don’t live in New York, I have generously decided to share some of mine. What follows are a few handy charts that will, I hope, help readers to improve their lives. 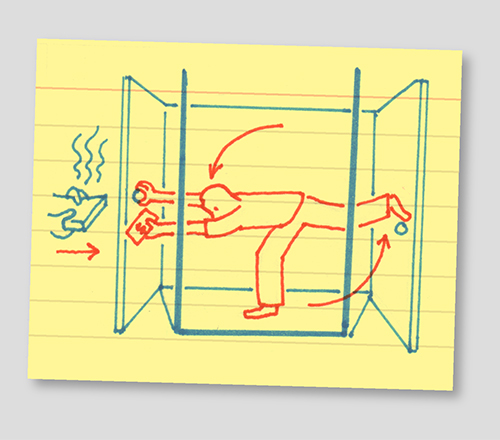 NY Times article covers the story behind the fascinating job of lighting one of the greatest landmarks in the city.

New York Times architecture critic, Herbert Muschamp rhapsodizes about Seattle’s new Central Library calling it, “The Library That Puts on Fishnets and Hits the Disco”. Seattle is a town with a big case of boosterism. Towns with this affliction usually have an inferiority complex derives from their envy of big cities like New York, Los Angeles and even San Francisco. This is precisely the case here. So when a big, bold, beautiful new edifice goes up, the local papers pull out all the stops. And they won’t disappoint with their coverage of Koolhaas’ Central Library. NY Times article

I really appreciate it when a smart number matches a significant moment in your life. Today is 12-6-2006, significant because I start a new job as creative director, Schematic (New York). I’m really thrilled and feel very privileged to be joining them. They are behind some of the best design work for television 2.0