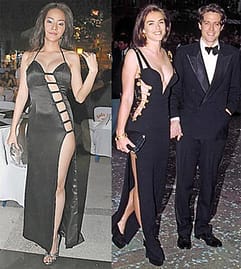 Oddly Enough from Reuters, an off-beat news blog on all the things that shouldn’t really be catching your attention, but do. It’s good gossip that’s masquerading as news, but like the title suggests you just never know how odd it is until you’ve read it.

Today’s story about a young actress and her little black dress.

For those who enjoy noting deep-seated differences among cultures, here’s one you probably wouldn’t find in Hollywood. A student and aspiring actress who appeared in a revealing dress at the Thai equivalent of the Oscars has been given community service as punishment for undermining morality. Chotiros Amy Suriyawong ensured maximum media exposure by stepping out last week in a full-length black gown, tantalisingly split from cleavage to hips to hem. But the authorities at her university described the outfit as obscene and gave her 15 days of reading books to the blind as punishment.

The whole incident has generated plenty of opinions. One producer went so far as to delete all footage of Chotiros from one of his films. A Thai newspaper actually reported that Chotiros won’t be wearing the dress when she reads to the blind. Thanks for clearing that up!